So yesterday I was making my way up to the front desk to get my late afternoon from Amanda & she seemed very upset! She told me that my dad (Dr. Morse) had an emergency coming in…RAT POISONING IN A DOG!!! To me that made no sense, I’m certainly not a rat so how can I get poisoned like them?!? Well I sure did get a lesson from my dad! Take a look at some of my notes below!

There are several different types of rodent poisons on the market. The effects of rodenticides vary depending upon the active ingredient. Be aware that different types have different toxic doses and poisoning can present itself in a variety of ways. There is no type of rodent poison considered “pet safe”. Most rodenticides have a grain and/or sugar base, making them seem like a tasty treat to both rodents and pets alike. They often come in pellets, blocks, granules, or liquids. They may be any color, but the most common is teal, blue, green, or pink. The only way to be certain which chemical a rat poison contains is to read it off of the packaging. The different types are: anticoagulants, bormethalin, cholecalciferol, zinc phosphide and strychnine. We are going to focus on Bromethalin today, since that’s what my dad treated yesterday.

Bromethalin rodenticide toxicity, more commonly referred to as rat poisoning, occurs when a dog becomes exposed to the chemical bromethalin, a toxic substance that is found in a variety of rat and mice poisons. Ingestion of bromethalin can lead to an increased pressure of cerebrospinal fluid (the liquid within the membrane of the skull that the brain essentially floats in) and cerebral edema (the accumulation of excess water in the brain). A variety of neurological-based symptoms can result from this, including muscle tremors, seizures, and impaired movement.

While other species may be affected by the accidental ingestion of rat poison, cats and dogs are most frequently prone to this condition.

Common symptoms of toxicosis in dogs include loss of appetite (anorexia), impaired movement, paralysis of the animal’s hind limbs, slight muscle tremors, generalized seizures, and a depression of the central nervous system. Ingestion of extremely high doses may cause a sudden onset of muscle tremors, and even seizures.

But if you have even the slightest worry that rodenticide ingestion has occurred, bring him to us so when can get on top of treatment as soon as possible!

Bromethalin rodenticide toxicity occurs with the ingestion of rodenticides containing the chemical bromethalin. Dogs may also be targets of secondary poisoning if they eat rats or mice that have ingested the poison themselves. Toxic doses of bromethalin are estimated to be 2.5 mg/kg for dogs.

If bromethalin toxicosis occurs, the dog’s digestive tract needs to be decontaminated as soon as possible. This may initially be done by inducing vomiting, and then administering activated charcoal and an osmotic cathartic (this induces the dog’s bowels to empty). This should be done every four to eight hours for at least two to three days following poisoning, or as prescribed by your veterinarian. Some medications are available which may be used to control symptoms such as muscle tremors and seizures. 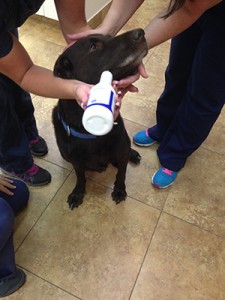 Bromethalin toxicosis can cause prolonged appetite loss (anorexia); therefore, some dogs will require feeding supplements for a time after initial treatment. It may take several weeks to recover from mild poisoning, and symptoms should be monitored accordingly to avoid further complications.

To prevent bromethalin toxicosis, ensure that your dog does not have access to rodent poisons. If you choose to use rat poison in your home with dogs, you will want to stay watchful for dead rodents so that you can properly dispose of them before your dog can get to them.

That poor patient my dad treated last night just kept saying how tasty that rat poisoning was! I hope you all learned as much as I did! As always, give the sweet girls up at the front desk a call if you have any question, concerns or they’ll be more than happy to give you some treats (they give me plenty but don’t tell my dad)!!!!!!