The Facts About The Dog Flu 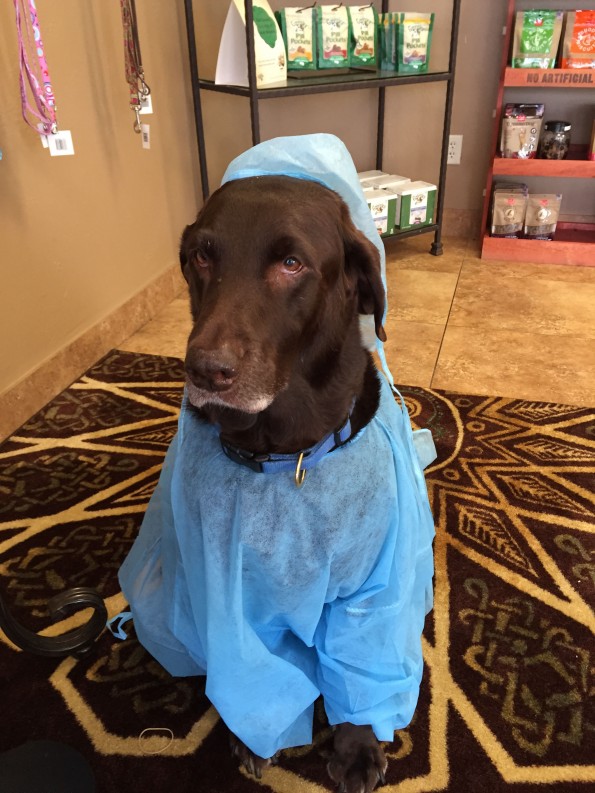 Hello all of my faithful readers!

I’ve heard some people talking about a flu that dogs can get, so I wanted to learn all about it since I come to work with my dad (Dr. Morse) every day. I have sniffed out all of the facts and want share them with you!

What is Canine Influenza (“The Dog Flu”)?

It is a contagious respiratory disease in dogs. No human infections with canine influenza have ever been reported. There are two different influenza A dog flu viruses: one is an H3N8 virus and the other is an H3N2 virus.

Where did canine influenza viruses come from and how long has it been around?

Canine influenza H3N8 virus originated in horses, has spread to dogs, and can now spread between dogs. The H3N8 equine influenza (horse flu) virus has been known to exist in horses for more than 40 years. In 2004, however, cases of an unknown respiratory illness in dogs (initially greyhounds) were reported in the United States. An investigation showed that this respiratory illness was caused by the equine influenza A H3N8 virus. Scientists believe this virus jumped species (from horses to dogs) and has adapted to cause illness in dogs and spread among dogs, especially those housed in kennels and shelters. This is now considered a dog-specific H3N8 virus. In September 2005, this virus was identified by experts as a “newly emerging pathogen in the dog population” in the United States.

The H3N2 canine influenza virus is an avian flu virus that adapted to infect dogs. This virus is different from human seasonal H3N2 viruses. Canine influenza A H3N2 virus was first detected in dogs in South Korea in 2007. This virus seems to have been an avian influenza virus that adapted to infect dogs and has since been reported in China and Thailand. H3N2 canine influenza has reportedly infected some cats as well as dogs. It was first detected in the United States in April 2015. The canine H3N2 virus is genetically different from human seasonal H3N2 viruses. It is not known how canine H3N2 virus was introduced into the United States.  This is the strain that they have seen in Chicago and now there has been 1 reported case in Texas. (This dog moved to Houston from the Chicago area)

What are signs of canine influenza infection in dogs?

The signs of this illness in dogs are cough, runny nose, and fever, but not all dogs will show signs of illness. The severity of illness associated with canine flu in dogs can range from no signs to severe illness resulting in pneumonia and sometimes death.

How serious is canine influenza infection in dogs?

The percentage of dogs infected with this disease that die is very small. Some dogs have asymptomatic infections (no signs of illness), while some have severe infections. Severe illness is characterized by the onset of pneumonia. This is a relatively new cause of disease in dogs and nearly all dogs are susceptible to infection.

How is canine influenza spread?

Almost all dogs are susceptible to canine flu infection, and illness tends to spread among dogs housed in kennels and shelters. Canine flu can spread to other dogs by direct contact with aerosolized respiratory secretions (coughing and sneezing) from infected dogs, by uninfected dogs coming into contact with contaminated objects, and by moving contaminated objects or materials between infected and uninfected dogs. Therefore, dog owners whose dogs are coughing or showing other signs of respiratory disease should not expose their dog to other dogs. Clothing, equipment, surfaces, and hands should be cleaned and disinfected after exposure to dogs showing signs of respiratory disease.

Is there a test for canine influenza?

Testing to confirm canine influenza virus infection in dogs is available. Your veterinarian can tell you if testing is appropriate.

How is canine influenza infection in dogs treated?

Treatment largely consists of supportive care. This helps the dog mount an immune response. In the milder form of the disease, this care may include medication to make your dog more comfortable and fluids to ensure that your dog remains well-hydrated. Broad spectrum antibiotics may be prescribed by your veterinarian if a secondary bacterial infection is suspected.

Is there a vaccine for canine influenza?

There is an approved vaccine to protect dogs against canine influenza A H3N8 available in the United States. It is unknown at this time whether this vaccine will protect against the H3N2 canine flu virus, but there is research being done to see if there is some cross-over protection for the H3N2 strain when your dog is vaccinated for the H3N8 strain.

We do carry the vaccine for the H3N8 vaccine at Cornerstone Animal Clinic and include this as a required vaccine for all of our boarding & daycare patients.  It requires an initial vaccine followed by a booster in 2-4 weeks. The vaccine is repeated annually after this.  I can speak from experience when I say they were so gentle when I received my vaccines, that I didn’t even feel them!

My dog has a cough. What should I do?

Call the awesome staff at Cornerstone Animal Clinic and they will get your dog scheduled to see one of our doctors for a comprehensive physical exam.

If you have any other questions, don’t hesitate to call the nice people up at Cornerstone Animal Clinic at 972-385-3555 or shoot them an email at [email protected] and they will be happy to answer them for you!